The Tossals of Almatret are located on the wide waters of the Ebro, at the southern limit of the confluence of the Segre, Cinca and Ebro. It is a natural space of pronounced buttresses covered in Aleppo pine with undergrowth of continental machines. Squeezed pine forests form an island of forests in an environment characterized by the opposite arid environments of machines and bushes. This area of natural interest was protected in 1992 by the Generalitat de Catalunya in order to safeguard these forest communities so scarce in the Ebro depression, the fauna and flora of great biogeographical importance that welcome and, particularly, landscapes of extreme beauty where the green of the steep slopes and inaccessible forests falls on the blue meanders of the Ebro on its way to the Delta.

A network of roads of approximately 1,150 km will run along the Ebro from its source in Fontibre (Cantabria) to the island of Buda, at the mouth on the south coast of Tarragona; Almatret will be the final point of stage 36 and the starting point of stage 37.

Currently, the Ebro is an important economic and communications axis in which the urban and rural, agricultural and industrial areas coexist in great harmony.

Several fundamental considerations justify the interest in carrying out this path of the Ebro: 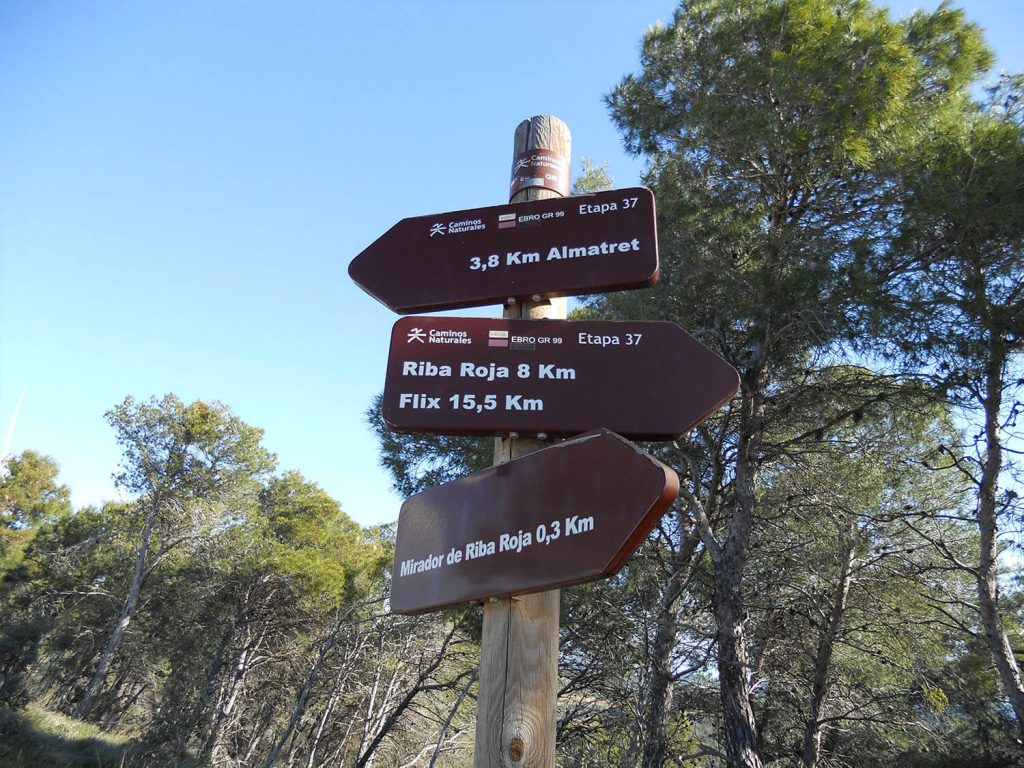 The project is of great importance due to its dimensions, with a similar approach in infrastructures and importance to the Pilgrim’s Way to Santiago, and it will be a great contribution to the network of Spanish and European footpaths. Fundamentally, the Ebro trail will link numerous trails and structure the network of hiking in the northern half of the peninsula and the Mediterranean.

With the realization of this footpath it is a question, definitively, of creating an infrastructure apt for the leisure, tourism, sport and education that responds to a wide range of sport, educational, cultural, tourist, social objectives, etc.

This GR-99 Ebro road will be carried out in the most respectful way possible with the environment, without major earthworks, with the aim of recovering the traditional road heritage closest to the river. The work consists of restoring, cleaning and signposting the entire route that connects public roads to incorporate it into the European network of long-distance paths.

The 1,150-kilometre route will be divided into 42 stages (59 sections), with an approximate length of 19.4 kilometres per section. The width of the path will oscillate between a little more than 4 metres and 1 metre, in the sections in which the path becomes steep. There will be more than 3,000 monitoring posts and more than 1,000 directional signs. Almost a hundred information panels will indicate the different stages and horizontal signs will mark the direction to follow during the walk.

The Catalan section of the Ebro path will have a first stop at Almatret, the only town in the province of Lleida that is bathed by the river Ebro, and will arrive from Mequinenza; it will enter via C / Maials, to Plaça Major, will continue along C / Sant Joan to the old windmill; to continue along a forest track and other roads, to Flix. Almatret is the final point of Stage 36 (Mequinenza – Almatret) of 20 km. and the beginning of Stage 37 (Almatret – Flix) of 21 km. 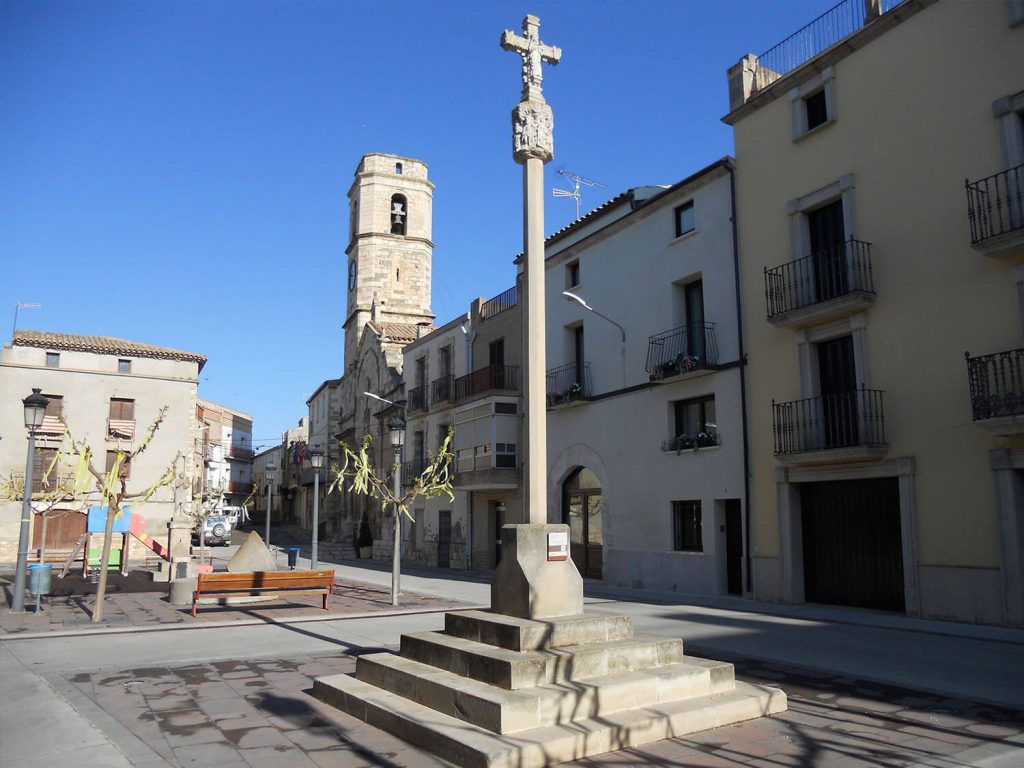 The Creu de Terme of 1608, in Gothic style, presided over the town’s Plaza Major until the 1920s when it fell and was deposited under the Almatret bell tower. During the Civil War it was taken out by the sculptor Apel-les Fenosa, to protect it from the effects of the conflict, and deposited in the Monastery of Sant Cugat. Even so, it never returned to its place. A few years ago it was discovered in front of the Santa Anna Church in Barcelona. From Almatret it was quickly claimed and, after some negotiations, the secretary general of the first councillor of the Generalitat took charge of the restoration and the bishopric of Barcelona agreed to return it in April 2005.

To restore it, all the original shapes have been taken into account, even respecting the worn parts before taking it out of Almatret. Both the cross itself and the capital have been restored, while the staircases, the base and the column that make up the whole of the Creu de Terme have been recreated from photographs. In total, 6.80 metres high by 3 wide.

On 20 December 2005, at 12:20 in the morning, the Creu de Terme once again presided over the Plaza Major, with great expectation from its legitimate owners, the residents of Almatret.

The Hermitage of Sant Joan and its Viewpoint

The Hermitage of Sant Joan is located right next to the municipal cemetery, about 300 metres out of the village on Sant Joan Street. This hermitage has been built recently keeping the style and characteristics of the hermitage that was destroyed a few years ago. Behind it is the viewpoint where there are benches so that people can go up to contemplate the magnificent views that can be seen from the nearby villages. 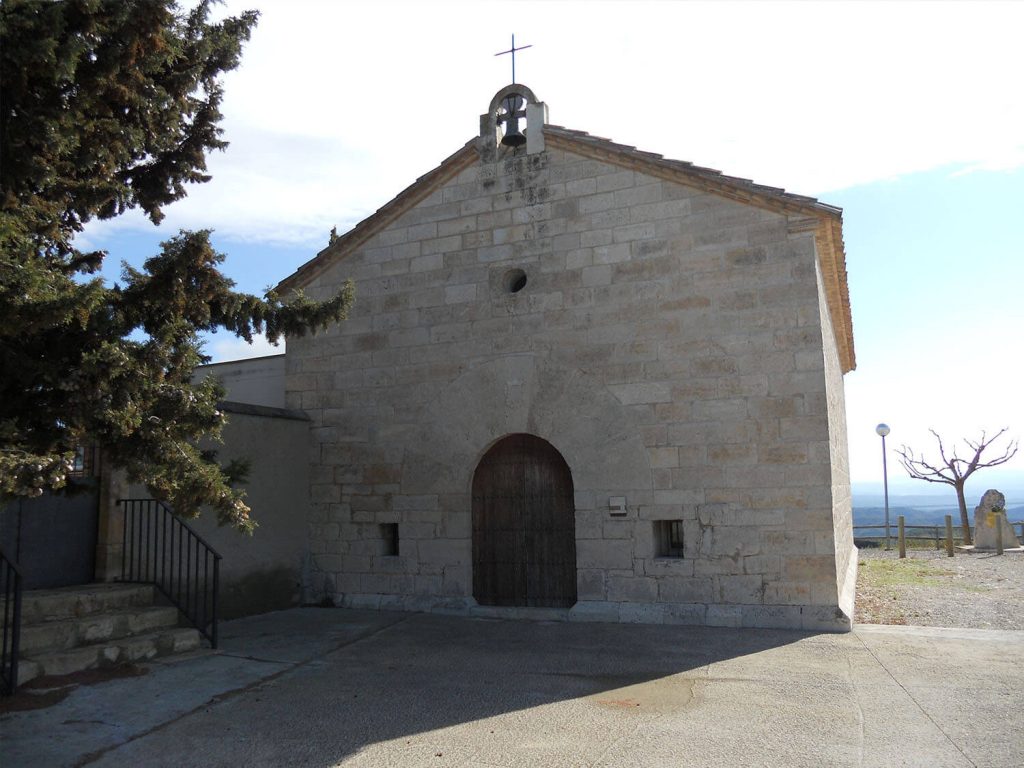 The old prison of the village is in the main street, 24. Above the door you can see the coat of arms of the house of the Montcada. The first Marquis of Aitona was Francesc de Montcada y de Cardona, who died in 1594 and was buried in the Seu Vella de Lleida. This marquisate included the town of Almatret, in which they had a house, which is still preserved today in the square next to the old prison.

The well of the village

Leaving the village, at the end of the street Pou we find to the right a way that takes us until this Well that already consists in the ordinances of the year 1558. Tradition attributes it to the Saracens, but it could be earlier. The well is made of stone as well as the wide staircase to go down to the water level, next to it are still preserved the 11 washing places made of stone that belonged to the 11 families that populated Almatret. 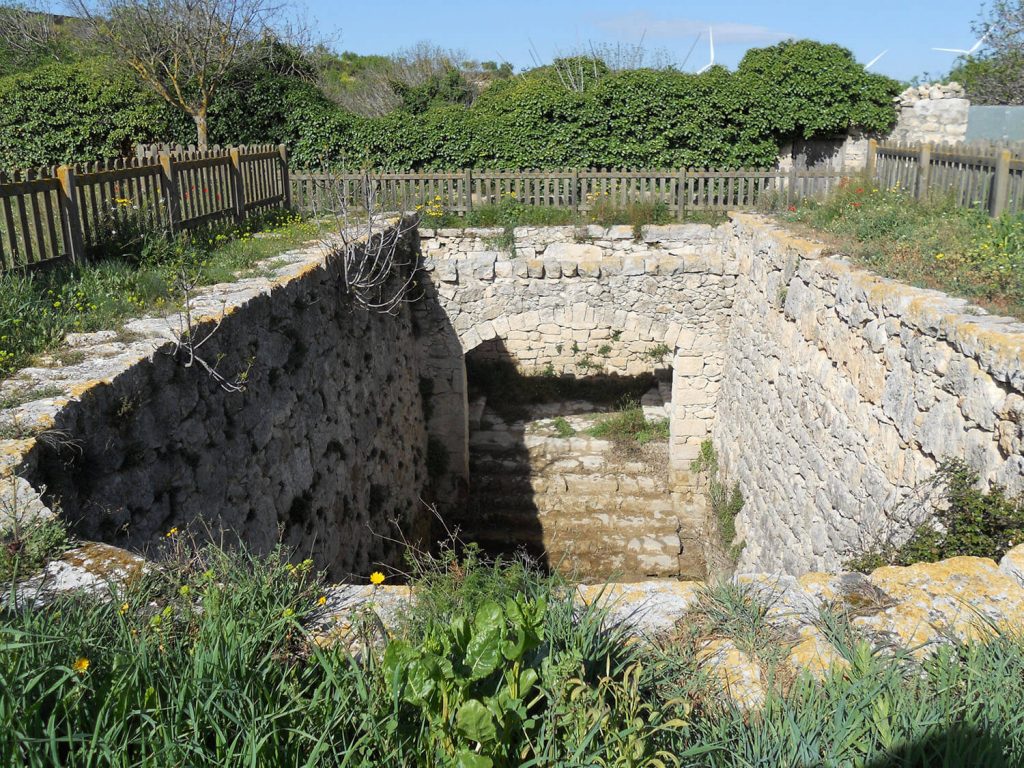 On the road that goes to Lleida, leaving the village 0.4 km to the left, we find a dirt road which is recommended to go on foot, by bicycle, or off-road vehicle. At 4.9 km. we arrive at the viewpoint from where we can enjoy a magnificent view.

Viewpoints of Riba-roja and the Dam

Leaving Almatret in the direction of the Faió road, 0.2 km from the village, we find on the right a dirt road that will take us to the viewpoints. The first one is 2.2 km away. It offers magnificent views of the town of Riba-roja. From the second viewpoint that we will find to 4,2 km. we can see the dam and the dam of the river Ebro with the possibility of practising nautical sports and fishing (catfish, perch, carp…). 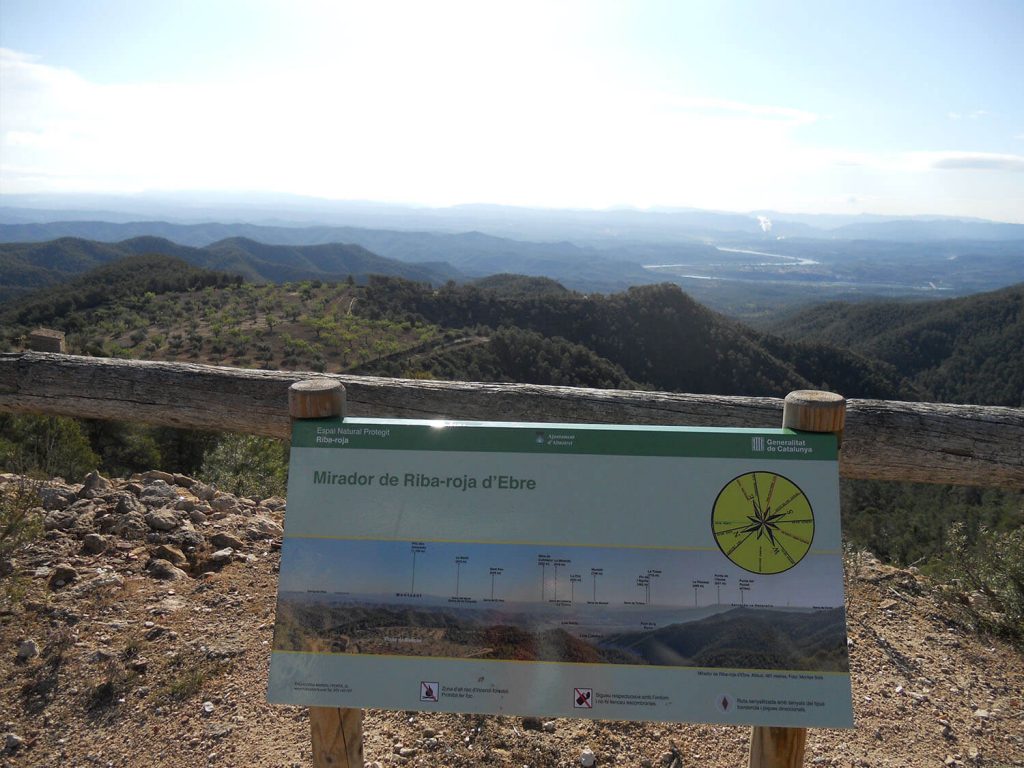 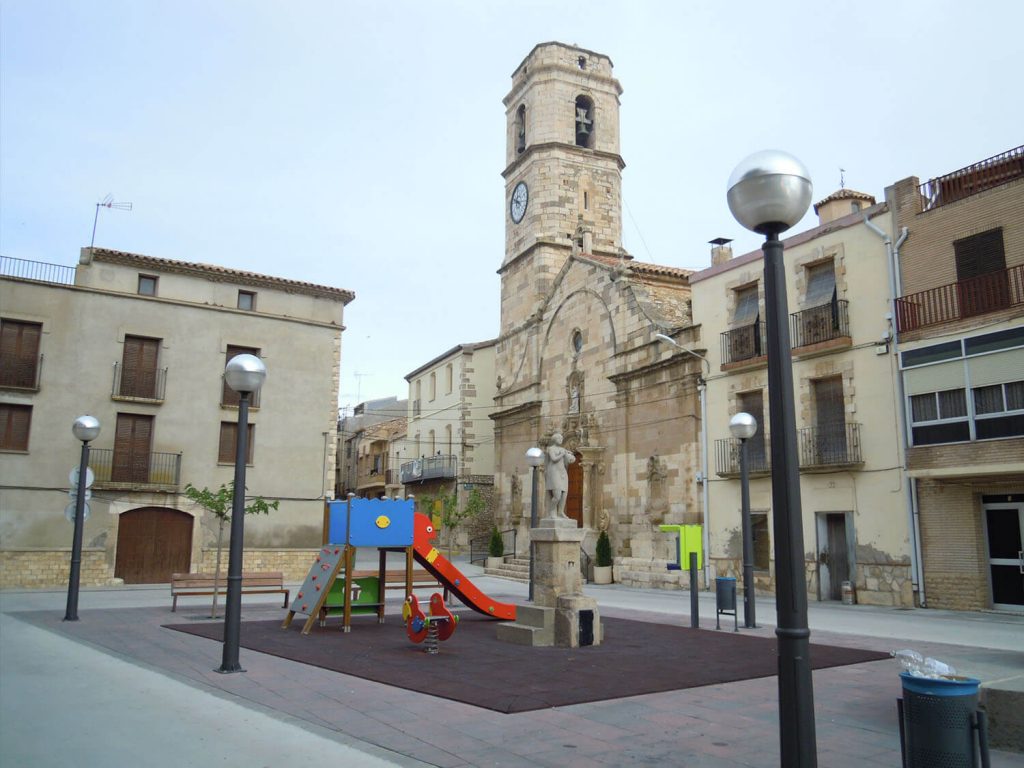 The Parish Church of Sant Miquel is of baroque style (18th century) and one of the most remarkable within this aesthetic in the Segrià and Garrigues, the front is framed by two columns of compound capitals.

It’s in the little valley that borders the village to the south. It is called Balsa de Arriba because it is a few meters higher on the slope than the Balsa below (impressive water receptacle built in stone, now disappeared). These rafts have been essential for centuries.

The raft area has now been fitted out as a recreational space.
We find many other rafts wisely distributed throughout the term. None of them are the same, but they all become an attraction that attracts any trace of life. It is very gratifying to do a tour to discover the small ecosystems they generate. 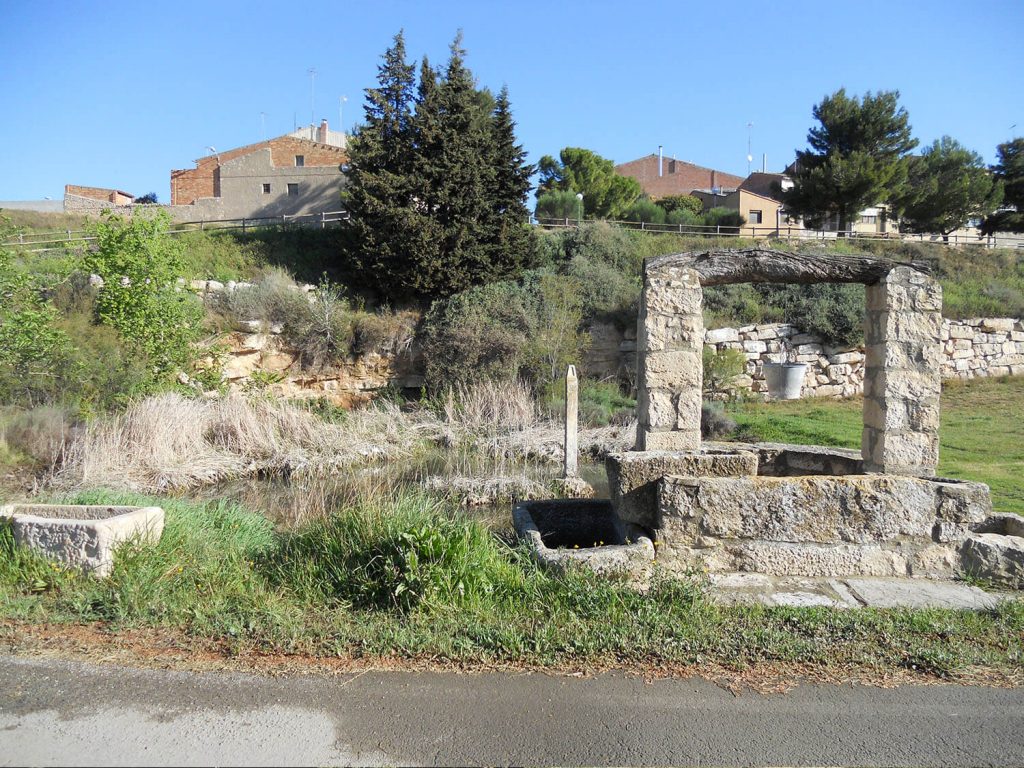 Almatret is located at the southern end of the Segrià and is 462 metres above sea level. The Plaza Mayor is its vital centre where most of the streets come together and a good starting point for your visit:

Throughout the year, various cultural, sporting and festive events are organised, among which the most outstanding are those:

The Tossals of Almatret are located on the wide waters of the river Ebro. It is a protected natural area, since its pronounced buttresses are populated by white pine groves with continental maquias and bushes, many of which are scarce in the depression of the Ebro. These places have a marked contrast of colours between the greens and browns of the steep slopes and the blues of the meanders of the Ebro.

Almatret has a wide network of paths and paths where you can practice hiking and mountain biking.

WE CAN CONSULT THE MAP – GUIDE TO THE ATTACHED FILE. TO THE LINK YOU WILL FIND THE ROUTES OF ALMATRET.

Recipe:
Take 4 or 5 handfuls of beans and put them in a pot with water in the fire until it boils. Add a jet of water to “scare them” and then a jet of olive oil, from Almatret, of course. When the beans are cooked, put cabbage and potato in pieces and leave to cook. When it is cooked it can be served. And if there is excess, it can be fried and used for another meal.

Peel the almonds and crush them. Beat the eggs and add the sugar, the butter, the almonds and the flour (try with successive quantities, until it acquires a certain consistency), the aniseed, the vanilla and the yeast. Work it with your hands until you get a pasty consistency. Let it rest for a while. Cut out the dough according to the chosen shapes. Grease a tray with oil, place the shapes on the tray and bake in the oven, previously heated.

All of them are located in the Segrià region, but they also have in common customs, economy and historical relations based on a very typical way of doing things.